We have been home now for almost 6 months and man, what a time!!!
We have to put together our 6 month report so I thought I would share a bit with you about how life has been.

I would also like to show you a bit more about how God performs miracles. 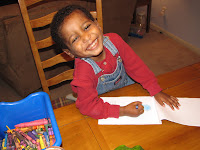 This was taken last week. 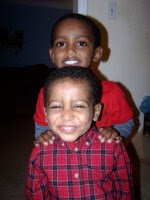 And this one in the last month or so.
Pretty amazing huh?!

We met a wonderful mother while in ET and she said several times that she wanted to see him after he had been home 6 months. ;o)
We have learned SO much in these past months.

What we have learned in these past 6 months has been tremendous, both about ourselves as well as about E.
I think one of the biggest surprises we have had is the ease of living with a child with HIV. That is not to say that we don't anticipate issues in the future, although those will surely mostly be due to stigma and lack of education. But all the health issues we have had have been secondary to the HIV. With the g-tube (that has turned out to be a Godsend even though it terrified me in the begining) E takes his meds without issue. He takes them twice a day with out argument, it takes all of about 2 minutes, and he is down and playing again. If we are going to be out when he is supposed to take them we just take them along, we excuse ourselves from the activity for a moment, do meds and then again... off we are back to the activity. No problem.
It just takes some creativity and flexibility.
We do still see the Dr monthly while we make sure all the other health issues are under control and his meds are working. As of Jan 19 he is up to 31 lbs, and the numbers that tell us that his ARV's (Anti-Retrovirals) are working are fantastic! He's pretty much a normal healthy boy now. Thank you God!
We do not keep his status a secret, nor do we announce it to every one we meet. We do have one acception to that rule, and that has been the new daycare he is in. Since we had had N in the old daycare for more than a year and felt we knew them well, we disclosed E's status. This ended up biting us in the butt...almost literally...lol They looked for ways to get him removed, non of which were truly valid, so we removed him ourselves.
There has never been a case of transmission in a daycare. Normal universal precautions are to be taken with all children. I can tell you that the CDC has deemed it safe to live 'normal' lives and attend school or daycare and since they tend to be over the top cautious, daycare is a non-issue. I completely understand the fear that can be involved, and know where it comes from... however if I thought my other children living at home were at risk, we would not have pursued this adoption. And heck they are more likely to get into scrapes at home rough housing than anywhere else...lol
We have been stretched farther than we thought possible, and know we have more growing to do. We have been blessed beyond belief by our friends and family. Friends that have stepped up to the plate to help in countless ways and loved our children, and supported us through some scary times. For family that began with concerns but have also stepped up and embraced E with open arms and love. Just the other night at my dad's birthday party E went up to Dad, held his hands up to him to be picked up, said "Uv you!" and gave him a huge hug and kiss. Dad had tears in his eyes, as he was one of the nay sayers who has been won by the love of a little boy.
If I had it to do again, I would. If D would let me, we would be heading back soon. He feels like we are done and is happy with life as it is. ;o) And that's ok. I will pray for God to either give me a peace with what we have, or give him a nudge that there may be another child waiting for us to give him/her love and a home. ;o)
Can't wait to see how things look in another 6 months... God is SO good!

Wow six months. Where does the time go? I know you had so many hurdles in the beginning with other health issues, but you surely have inspired me to stay strong and keep pushing forward. And look at the progress your little E has made. Simply beautiful. You are a great mother!

Little E looks amazingly healthy my friend. It's all the love, good food, and medical care he is finally getting that he has needed for so long! It still boggles my mind to think, that in Africa, HIV is still basically a death sentence. And in America, it is such a managable disease. It just seems so senseless that people around the world are dying from this for lack of proper medication. thank you for being a voice for those who can not be heard!

Oh Andrea, to have seen him then and know where he is now. God is so good. Thank you for taking a path less traveled and being able to reap the secret rewards of doing so. We are so blessed.

E looks so good! WOW, the boys have gotten so big.

He looks fantastic. It's amazing isn't it? It was neat to read your 6 month report. It put a huge smile on my face.

He looks WONDERFUL! Give him a hug from Chris, Sam, and Beshir.

I enjoyed reading this. I continue to stand in prayer with you. I love the photos! Look at that smile.