We met him a year ago 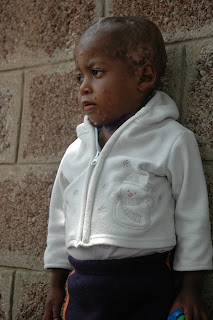 I hope you all will bear with me this week as I reflect on the past year with my Little E.
One year ago today we met our little guy.
It was pretty unconventional and extremely emotional. But so good at the same time.
We arrived in Addis from DC in the morning. We were exhausted and our ride was no where to be found. The guest house we were staying in was to send someone, but we had gotten our wires crossed and he thought we were arriving in the evening not the morning. The blessing was that I had the phone number for a driver who was able to show up after about 45 mins to take us to our Guest House.
We arrived at the guest house, unpacked a few things and laid down to catch a few minutes of sleep to prepare for meeting our son.
We had been there for about an hour when we were called and told they were on their way with him. ??? Yikes??? What? um ok, here he comes! ;o)
They drove up and placed him in our arms. He looked at us and we looked at him and we all just tried to drink it all in. He had just woken up from sleeping in the truck and we were jet lagged so none of us were in the best of places.
He was dressed in a faded pink sweat suit and was just so tiny. He was quiet but seemed to enjoy the toys we brought him.
We didn't know if he had eaten or had his meds, or anything about him. It was pretty crazy. They brought his meds a bit later and told us a bit more about him and handed us some medical paper work.
After reading the info we found some new and improved medical items that were worrisome. Possible heart issues, the TB, skin lesions and burn scars, and the molluscum that was harder to see in person coupled with the wound on his head ... were almost more than we could handle. We put E down for a nap and I laid on the bed next to him and just cried and cried.
He was very weak, he could hardly walk much less run or jump. We would try to take him outside in the afternoon to play with bubbles or throw a ball and he would just fall over. Poor little guy it was so hard to watch. He wasn't all that keen to have us help him either.
We would try to give him his meds while there in country and he would have no parts. (thus the g-tube when we got home)We ended up wearing much of it, and cleaning up the other off the floor (sorry for the TMI) .
One thing we found that was just too sweet was his singing. He would sing in the morning. His favorite song...and it was in English... was "Good morning, I love you" He would walk around the table at breakfast and sing. He also loved to make little noises and sing other Amharic songs. He still does this.
We learned about him and he learned about us. He was stubborn and we were shell shocked. He was tired and in pain and we wanted to help. He tried to push us away and we tried to pull him close. He wanted to go back to the orphanage and stay with us at the same time. We called home and cried. We cried out to God for His strength and guidance. We prayed with each other and for each other. It was one of the worst and best of weeks....lol
When God came through with Erin at AAI and Carolyn at Project Hopeful and got us our Visa in 2 days we were over joyed.
We had mere hours to pack, each lunch, change our airline tickets, have a going away party and get to the airport that very same day. It was a whirlwind, one that I still cannot believe happened and worked. God was SO SO good! He is still is! 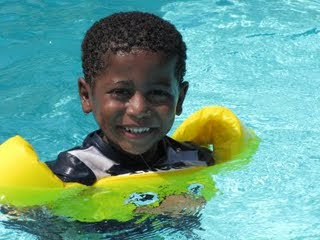 Today E went to see the PID and was given a clean bill of health. His numbers are all fantastic. The Molluscum is all gone with no traces left. The wound on his head is also gone and completely healed. His is strong. He can run without falling 99% of the time. He can climb stairs by himself, and come down them without holding on. Where he couldn't get himself off the ground to jump a year ago, he can now jump a foot. And the best part is that his blood work shows that his HIV is undetectable where is was so out of control when we came home. He's grown from 35 to 39 inches and from 25 to 35 lbs!!!

He asked me last night why he keeps growing, and I told him it's because we keep feeding him and loving him.

Daddy brought him by to see me at the office today after his appointment and I was just so overwhelmed with how very much he's changed and how very very glad I am that he is in my life.

How precious to remember! And how wonderful to see how healthy he is now...he is so cute!

Absolutely miraculous! I had not heard his story before. Very moving.

Thank you so much for sharing this! God is so good! He is the God of healing! Not just your son but your family!

Wow, he has had quite the journey... He is absolutely precious and clearly thriving!

What an amazing story! I remember when you came home with him and how overwhelmed you were for the first few months. I prayed for you and prayed for him during that time. Look where God has brought you!

I cannot believe how far he's come. A true testimony to the love of God, the love of a family, good medical care, good nutrition and the amazing resiliency of a little boy.

God is so good!

Laura, thank you for your prayers then and now! It sure was overwhelming at the time! There were days when I truly doubted how I was going to make it through with my sanity intact. I spent a week in tears, almost literally. And that is totally not like me. But those days are long past...do I wish we hadn't had to go through it? Honestly yes... but I wouldn't trade E for any of it. He is worth it all! And then some.

what an amazing testimony!! Praise
God!

Oh wow--the change in just one short year is breathtaking! Unbelievable. I have chills. I LOVE stories like this.
Thanks for sharing your precious memories.

Andrea,
Words cannot express the love I have for you guys. You've always been generous and loving but God is doing so much through you and the rest of the family. I am so very happy and proud of everything you all are doing. I miss you guys terribly and hopefully "Lil Man" and I can meet our new cousins soon. I have been sharing your wonderful journey with people at church and through my blog, just telling them they have to go and read yours. Love you!

Just found your blog. I am so glad I did. This post brought me to tears.

God is so good!

I never read everything so detailed as you described in this post. Thank you so much for sharing all of this. It means so much. The moluscum is so much in that picture and I bet the picture doesn't even justify how bad it was. I can only imagine what a journey this has been for you but really to knit and grow your family in Christ. That is why that little guy was placed in your familiy. As I just said a few days ago, I remember clearly the long hospital stayd and all that happened. E. was and is a very special kid and a big fighter. Even though I have never met him, I just love him so much. And the changes he has made in just one year. Wow, amazing. I love your whole family so much.

What an extraordinary story of God's healing power through love and perseverence.

As a fellow adoptive parent, I know you don't want, or expect, a pat on the back, but I do want to echo the words I know that God has already spoken over you, "Well done, good and faithful servant." The photos showing your son's beautiful transformation are breathtaking. A miracle, indeed. Can't wait to see what else God will do in and through your beautiful family!