Hey surprise, I am not going to talk about the yard sale today...lol Although it's CRAZY busy and taking up so much good time. ;o)

Last night we went to the LearningRx place to talk to the director about N's results from the evaluation done on Saturday.

This was such an eye opening experience.

First they sat us down and told us about the company and the background and what they do. As we were thinking "ok, thanks, just tell us what you think about the tests...lol"

So then they gave D and I a bit of an example of the kinds of exercises they do with the students. While interesting, I wasn't really sold. After one of the exercises she gave me to do she said I had some weakness in multi-tasking. ??? D and I looked at each other and at her and just laughed. If there is one thing that I do, and do well it's multi-task. I was telling my mother in law about it later and she just laughed as well.

We got to N's results.

Only one place did he not do so well. It was matching sounds of letters with the actual letter. Or being told a letter sound and not being able to write it down.

I think there is actually an easy answer to this area of need. This past year, which would have been his Pre-K year, was fraught with stress and upheaval and no consistent learning. He didn't have the same kind of 'teaching' that other kids his age did. We have actually seen this lack of sound and letter recognition ourselves. The funny thing is that this past week he has been asking us alot about what letter starts some word. Like what does "mom" start with, but he cannot tell us the letter it starts with. I totally think he caught on in the evaluation that he doesn't know this information and he's trying to figure it out. Must be the 9 yr old logistical reasoning part of his mind. ;o)

In looking at all of his results he is operating on at least a 5 1/2 yr old level and in more cases on a much older level. So I asked the lady, "Why do we need you?" She was kind of taken back. She even said I was asking questions other parents don't.

She jumped on the reason we originally called them, which was his impulsivenes and some lack of focus, and that she felt that they could help him...to the tune of 3 in office visits a week, 2 hours at home a week and 3700.00 for the 3 months of work.

She said they wanted to even out his 'results' and have him operate more consistently in the higher level of cognitive reasoning... in other words have my 5 yr old work on a 9 yr old level since that's where his strongest score was measured.

Some how that seemed wrong to me. And not just because of the time and money!!!!

I mean look at what this kid has come through. He has only been in this country for 2 yrs, this is his second language, and this last year has really kind of sucked for him. If he is working on a level that is at or mostly above his age then I think he's doing better than ok!

Just that afternoon my friend who took the boys peach picking (which couldn't happen because the place was closed, bummer, so no pics to share) called me to tell me how great my kids were. She said they were so well behaved and well mannered. That D and I must be doing something right. She is also a school teacher. And wouldn't be calling me to blow smoke up my hind parts. ;o)

So... perhaps because I was annoyed with my perceived lack of multi-tasking skills, or the video for the company that kept harping on the word "fix" for my child, or maybe it was the 3700.00 bill... but I so felt that this was not the place that was going to be able to help N. In fact he doesn't need 'help'.

Perhaps they do good things, I guess they would have to be be so large and in business for so long. But I don't think N needs to be fixed.

We were discussing the results with S and even she (whom N drives absolutely bonkers most days) said, "mom, he is 100% better than he was even a couple of months ago."

God has actually been placing other children in our lives recently that have shown us that N is so very normal, if not so much better than other kids his age.

Is he impulsive? Oh most definitely, but out of the realm of normal. No he doesn't seem to be actually.

Is he energetic? Oh my goodness..YES! But can he be redirected? Yes he can. Is me more energetic than other kids his age or older? Nope.

We do have some mandatory testing on Wednesday that all the public schools do to see if the kids need extra help in Kindergarten. I think we have a tool in hand that we can share with them and see if he needs extra help in those areas.

I reflected quite a bit last night on the last year and the way both boys have evolved and grown and prospered.

On a funny note my mother in law was telling me last night that she would swear that D fathered N naturally. He is SO much like his daddy. 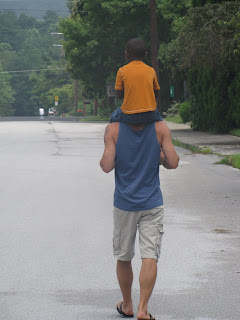 The funny part about that is while we were in the office waiting for the results meeting I was thinking the exact same thing...lol D was playing with all the puzzles trying to make them work and he figured them all out and then beat me 5 times in Connect 4. He's just busy all the time.

So all this to say... N is just what we thought he was all along. So much smarter than the average bear (just like his big brother) but also so like his peers... and all around a pretty amazing kid. He may need a bit of help in some areas... but good heck who of us doesn't.
Posted by Andrea at 9:24 AM

Give N a hug from all of us. We love that kid!! And I have no doubt that he is going to do some amazing things with all of that energy and brilliance! :)

Don't these precious little boys keep us on our toes or what?

Don't these precious little boys keep us on our toes or what?