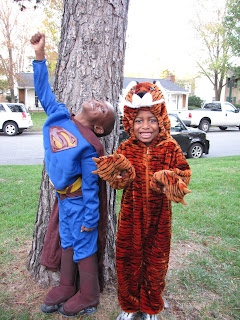 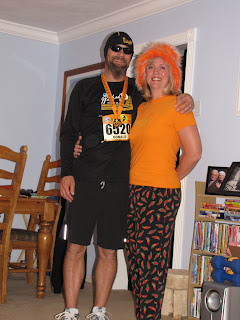 What fun we had this weekend!

Friday night we took the boys to their school for the fall festival. There were a ton of kids and lots of lines. It was mostly fun, but that kind of atmosphere sets N into a sensory tizzy, so we have alot of re-directing to do. It's such a hard spot to try to contain without suppressing his fun....and ours.

I think it was a success and the boys slept really well that night!

Saturday dawned early, D and I ran in the Wicked 10k race down at the oceanfront...lol oh my goodness, it was a not so comedy of errors. The morning was beautiful, we were feeling good, it was cool and sunny and there were lots of people.

As our corral was moving to the front I felt the urge for the portapotty...but chalked it up to race nerves so just pushed through it. MISTAKE! By the time I got about 6 blocks I was really feeling it... and of course no potty in site. D is urging me forward trying to get me to keep up. And to risk tmi here... I am no longer a spring chicken and can I just say the 'control' is not what it once was...LOL I kept telling him to go ahead I would walk my way to where I knew there was a potty on the course... 2 1/2 miles later... there it was! Never been so happy to see a portapotty in my life...LOL

Then I was feeling great and took off... passing people feeling good... then OUCH who knew you could get a cramp in your Gluteous???!!! Well ya'll let me tell you... You can! So there I am gluteous cramp on the right and new weird foot pain on the left. Seriously... I was pretty annoyed at this point. I mean heck I have been to the gym at least 4 days a week for the last 4 months or so... what is my body doing??!!

I felt worse on this 6 mile run than in the 13 miler in March and I was in worse shape then.

I did hobble myself over the finish line and fall into my waiting, perfectly happy and not sore husband's arms...lol

That afternoon was spent with S at a modeling interview...we will see if she gets accepted tonight. Prayers for doors to either open or close. She is good with either, although she's always wanted to model.

Saturday night was a party with our friends. It was fun to be out with my hubby and just hanging out with friends.

Sunday church and trick-or-treating were beautiful and special. My boys LOVE dressing up and running around. By the time we were done collecting candy N says "Momma, my feet have run out of batteries". Man could I relate!!!

This week is a short one... we will be in PA on Friday for the Mid-Atlantic Orphan Summit. There still time to sign up! Please join us!!!

Hope your weekend was fun and cramp free! :)
Posted by Andrea at 1:57 PM

You all look cute!

Love you and praying for you sis.

Have fun at the Summit! I'm sure it will be a huge blessing and encouragement:)

Can't wait to hear what you have to share about it!