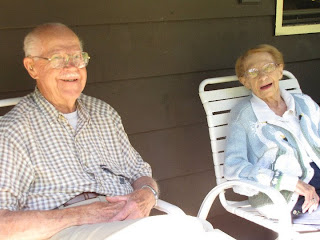 In doing the study Out Live Your Life and then the passing of my grandmother (mom), I have been doing some reflecting.

Part of the premise of the book is that God asks us to work for Him. To do something that will out live you and Glorify Him.

I have been thinking of ‘Mom’s’ life and all that it held. She wasn’t your typical, if there is such a thing, grandmotherly type. She was a lot of spirit in a tiny little body. She was the daughter of a Doctor. She came from money and fell in love with a guy from school. They were a beautiful couple.

They had 6 children. And a ton of love!

She was a lab tech in the local hospital in their small town and I remember when we were visiting that we would hear the big siren go off at the fire station and we would have to stay off the phone so that if she was called in that she could answer the call.

She was very involved with her church. She and my Grandfather would leave early on Sunday’s and travel the 45 minutes to church so that he could start the coffee and she could set up the Sunday school rooms. On holidays we would take up 2 whole pews in the church… we were the Smith Clan.

She worked with a craft fundraiser every year, with crafts usually from South American countries that helped the locals. We would get gifts from them every year. We also usually got ‘regular’ gifts and then something from World Vision or some other charity on holidays.

When I was pregnant I was told in Lamaze classes that I needed to find my happy place for when I was using breathing techniques. I chose the sun room at their house. I never actually lived there for longer than a few months when I was little, but that was home to me.

That’s the kind of life I want to live. I want my children to know that the world is bigger than our 4 walls. To know that God loves them no matter what and that they can do anything.

‘Mom’ often said that she was blessed with such great kids and grand kids… and we would say back to her that she was the one who started it all. She also said recently and frequently that she hoped we all had the same love and laughter that she and ‘Dad’ had in their 68 years together.

Thanks Mom and Dad… you have left beauty and love!
Posted by Andrea at 11:42 AM

She sounds just awesome. I know it hurts to lose her, but it's wonderful to KNOW your separation will be brief in comparison to eternity. That's a great gift.
Terri

Your family was certainly blessed to have had her be such a present part of your lives. She has left a legacy that will live on through you, your kids and the lives of everyone she touched.

I am so sorry for your loss, Andrea.