We are so excited to announce that we are now the proud new family for B and A ...!!! 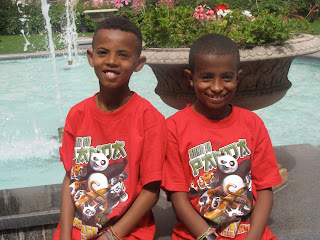 A little back ground on our story….
We were a family of 4. Two parents, 2 kids and a dog…the kids were teens and life was comfortable.

Then God had other plans. He shared the story of adoption with us through Steven Curtis Chapman’s family. We decided to move forward…after many mountains were moved we were able to move forward with the first adoption of our N at the age of 2 years old in December of 2006.

While we were there we fell in love with the people and the country and decided we needed to go back.

Two years later we began the process of adopting our second son who had been a waiting child for more than a year. He became very ill while in the country and wasn’t expected to make it. Our pediatrician gave us the grim news after reading his charts from Ethiopia that he wouldn’t live. We gathered in the living room as a family to pray.

E survived but his road to health was hard and long. When we landed in the states after only knowing him for 5 days we spent the next 12 in isolation and then many others with Dr’s and surgeries. But he’s healthy and strong and hardly ever ill any more now.

Last year in January we decided to take the leap one more time…only this time we knew there were 2 more, and that they would be older kids. I, Andrea, had been to Ethiopia leading mission trips and I knew that the older kids were the ones that needed the love and homes…since the littles are usually scooped up first.
Through prayer God helped us choose A and B, not related boys through the agency that we had used for E’s adoption.

I went to meet the boys while on a mission trip in June 2011 with my daughter and mom, dad stayed home to take care of the other boys, cause he’s good like that. 
Final paperwork was filed to get the boys submitted to court in July …. Then ….. nothing.

November came and in a desperate plea I asked for a Christmas gift to go back to see the boys and see why our papers weren’t moving.

We were told in December that both boys needed to have their files completely redone which could take months.

Those months stretched to May 4th when we were given the rights to parent both boys in Ethiopian Court. Almost a year to the time I met them for the first time.
In the mean time we found that Dad, needed to have surgery … this has taken a huge toll on finances we had saved for our return trip to bring both boys home in July (our hopeful time frame) … so we are asking for help from those that cannot or choose not to adopt but want to help in some way to bring them home.
So that’s where we are… and why we are asking…


And we now need your help in a huge way! We are raising funds for the trip home. Please check out our fundraising site... we need 5500.00 to get them home... we know he will provide!!

Our Un-Shower ... Thank you for your help and for sharing this with your friends!!
Posted by Andrea at 11:07 PM

They are beautiful.....wish so badly I could adopt again. I'll just keep prayin. What lucky boys!!! Keep us posted on the details. Susan